Julie and the Phantoms

View source
watch 01:25
Jurassic World: Dominion Dominates Fandom Wikis - The Loop
Do you like this video?
Play Sound
For the band with the same name, see Julie and the Phantoms (band).

Julie and the Phantoms

September 10, 2020 (Season 1)
Julie and the Phantoms is an American comedy series based on the original "Julie e os Fantasmas" series from Brazil. The Netflix version was created by Dan Cross and David Hoge. It stars Madison Reyes, Charlie Gillespie, Jeremy Shada, Owen Patrick Joyner, Jadah Marie, Booboo Stewart, Cheyenne Jackson, Sacha Carlson, and Savannah May. It was released on September 10, 2020 on Netflix. [1]

Teenage Julie finds her passion for music and life while helping the Phantoms - a trio of ghostly guys -- become the band they were never able to be.

On April 9, 2019, Kenny Ortega signed a multi-year overall deal with Netflix, including production of Julie and the Phantoms. Ortega executive produced the series alongside Dan Cross, David Hoge, George Salinas, and Jaime Aymerich. Cross and Hoge also serve as showrunners. Production companies involved with the series were slated to consist of Crossover Entertainment and Mixer Entertainment.[2] On August 26, 2020, an official trailer was released[3] and the series was released on September 10, 2020.[1]

Principal photography for the series began on September 17, 2019 and ended on December 14, 2019 in Burnaby, British Columbia.

Caroline Framke of Variety wrote, "Sure, their ghost adventures become very silly, very quickly. But who cares! Julie and the Phantoms is just fun and adorable enough for none of that to really matter."[6]

For the series, review aggregator Rotten Tomatoes reported an approval rating of 93% based on 27 reviews, with an average rating of 7.9/10. The website's critics consensus reads, "With catchy tunes and just the right amount of ghost jokes, Julie and the Phantoms is a fun, feel-good show that proves a perfect showcase for newcomer Madison Reyes."[7] Metacritic gave the series a weighted average score of 77 out of 100 based on 7 reviews, indicating "generally favorable reviews".[8] 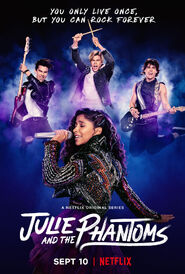 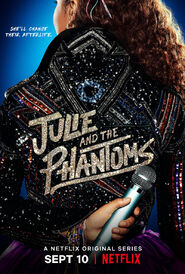 Main article: Julie and the Phantoms: Music from the Netflix Original Series

A soundtrack was released on September 10, 2020, alongside its series debut on the streaming service.[9]

Community content is available under CC-BY-SA unless otherwise noted.
Advertisement